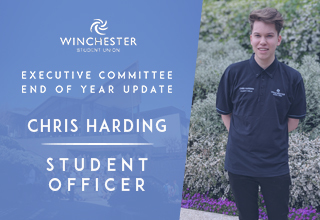 Student Officer Chris Harding reflects back on his year in office as part of our Executive Committee End of Year Updates...

While Semester Two was definitely more event filled, I personally found it way more relaxing and less stressful than Semester One. On the 14th January I manned the Student Union stall during the Refreshers Fayre, where I promoted the new opportunities the Student Union were offering in Semester Two as well as the newly-opened Advice Centre.

On the 20th January I attended a focus group meeting with the catering management team along with VegSoc. All views were my own, I was not there to represent the Student Union as it was outside of my Student Officer responsibilities, however I felt it was necessary to attend as I care so much about animal welfare and liberation. We discussed and challenged the out-of-date advertising and false claims regarding animal products across the University’s catering outlets. I brought up the proposal of a campus-wide ban on beef in which the team agreed they definitely needed to look into more – whether or not this has been a success I am not at liberty to say.

As I was the only member of the Executive Committee eligible to re-run in the SU Elections but who decided not to, I spent the election week in February helping Tiffany Burnett, our Student Engagement Manager, with the polling stations and the democracy dogs. I ran around campus promoting the election and encouraging students to vote. I got people to vote digitally or provided them leaflets with the information about the election. While there was an increase in voter turnout from last year’s election, unfortunately we were quite not able to reach our target number which would have meant a free ice cream van on campus. I feel partly responsible for that to be honest.

Unfortunately, due to Miss Corona my experience as being part of the Exec Team was cut short abruptly, and there were a few things I had planned that I wasn’t able to fulfil such as a vegan cook-off in the Vault.

I will really miss being alongside all the fabulous and stunning gals in the Student Union, and I am so glad that in my 1st year I decided to take the plunge and run in the elections – I also encourage other students to do the same. Overall I am so pleased with how the past year panned out and I do not regret the experience at all.