Tell us your name? Dan Chevalier

What are your pronouns? He/Him

What course do you study, and what year are you? Politics & Global Studies final year

Tell us your story.

Winchester has such a great sense of community. Being a smaller university, you benefit from that friendly personal touch to your experience here. I love the city itself with tonnes of great pubs and bars, looking great in both winter with the Christmas markets, and summer by the cathedral grounds and St Catherine's hill. Born to Dorset, and only ever having lived in Dorset up until University, I am 1 of 2 with an older sister living in a small town called Wareham, along the Jurassic Coast. This is a small town which lacked diversity and popular with the older generation limiting my exposure to the wider world and to the full breadth of diversity within society. This meaning that for example, coming out as gay in school would become a big news story/gossip, due to the fact it wasn't hugely common with not many open LGBT+ students in my school. My experience was met with lots of acceptance, excitement and celebration luckily though so everyone had my best interests at heart! Exposure to more diversity within society is something I have through university had the chance to explore, living in a city and travelling locally and abroad meeting people along the way which I have loved!

The university gave me the opportunity to regain my confidence in my abilities as well, something knocked out of me through poor educational and professional support from my sixth form who only respected core sciences! I was told I would be set to fail unless I became a biologist, engineer, or some kind of scientist. In my earlier years I was respected as an intelligent boy with lots of potential, this being quashed in my Sixth form years by teachers who would fail to support anyone who dares to follow their interests, instead of the teachers' personal interests. This is incredibly wrong and an awful rhetoric that I was under the influence of, which saw many students in this school also suffer the consequences of this. Winchester gave me that new start to get involved in a passion of mine, politics, and to thrive in the experiences I've had, working for the university and being apart of societies. University is more than just a degree, it's a lifestyle (one with that newfound independence away from the family home). It also gave me the comfortable and safe freedom to live openly in my sexuality, something which I came to terms with in secondary school. It was great to come to Winchester as an independent student being self sufficient, knowing who I was and to start on the right foot in such an accepting positive environment.

This really helped with coming to a new place when meeting new people, it's like how you brand yourself in a new environment. I'm thankful for my lecturers and the Students Union for making the experience an incredible one with a really engaging course, as well as a thoroughly enjoyable social life with many great people! The people I've met and social experiences I've had here are amazing, but by far the best thing to happen to me at Winchester was being elected the next Vice President, Education & Welfare! I am extremely glad I came to Winchester, and proud of what I have achieved here. I've made some great lifelong friends and learnt so much about myself, as well as proved those in the past wrong who persistently doubted my ability and used who I am against me. It's been the best years of my life filled with many, many great memories to carry forward! 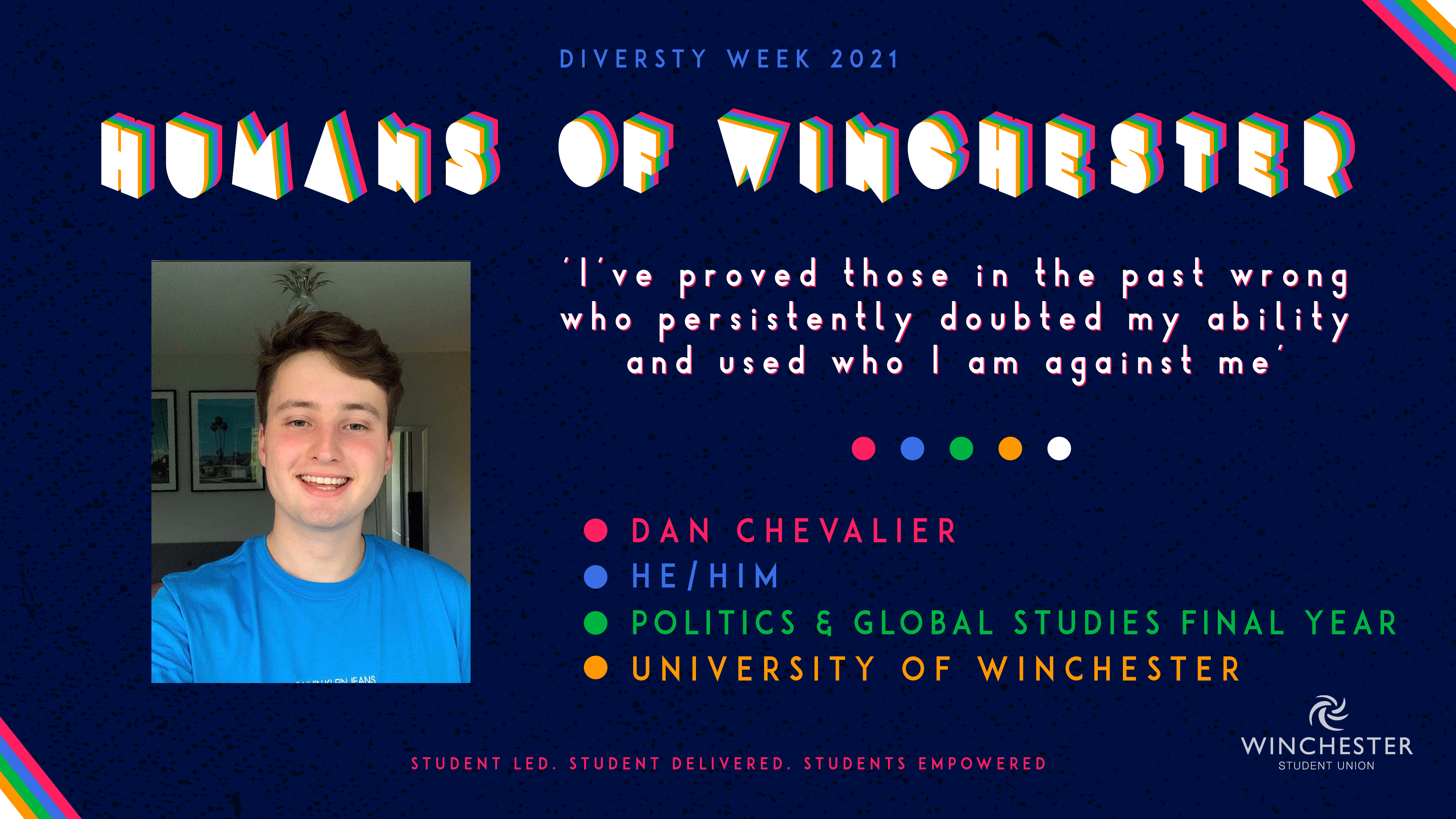